So I went Black Friday shopping and stopped at Victoria's Secret. Why? Well, I had to pick up a few things....for a friend.

Honestly, I hate going into that store. The "Bra Specialists" stalk you with talk of finding your perfect fit. Okay, number one, what schooling do you need to become a "Bra Specialist?" Is it a four year program? Can one eventually get their Masters in Tittology? All I can say is...bitch better have some sort of degree. And TWO, there is no damn thing as a 'perfect fit.' It's a goddamn bra! Bra's suck.


Plus, the staff hovers. Come on! My head is the same size as my boobs. So when I try the bras on my noggin in the middle of store, I don't really need a "specialist" looming over me, treating me like I'm some sort of sped. Shut up. It works for me and that's all that matters. 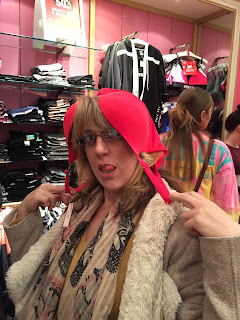 
While slogging thru the throng of whiny bitches, I happened across a 'door busters' sign on gutichies that were pretty damn nice. And apparently, every other cheap gutchie loving bitch did too. The estrogen and Vickie's odoriferous perfume line were so thick I couldn't even get near the display.


Luckily, since I had my thinking-cap on,  *see above photo* I scurried out of the store and purchased a small cup of pretzel bites from Auntie Anne's Pretzels. Now, I'll admit, I was a bit hungry but I had other plans for those greasy little nuggets.


After munching on a few of them, I snuck the cup back into the store- in my purse- which is perpetually open because I'm too lazy to snap it shut.


I pushed my way through scary mother/daughter panty shoppers, the twelve-year-old baby hookers in training and the grandmas with fantastic body image to the round display of panties. Unfortunately for me, there were hands everywhere. Every time I'd grab for a sliver of silky fabric, another hand would pluck it from under my fingertips.

It was time to bring out the big guns or in this case, the bite sized guns. Acting as though I was picking something off the floor, I tiltled my purse so the pretzels precariously perched in my purse bounced and rolled all over the carpet.

The sight of those rogue pretzels co-mingling on the floor with all the lint, glitter and body dysmorphia birthed fear in those women's eyes. But there was one chick who pointed a manicured nail at the doughy buggers and really chummed the panty-lined waters.

In a thin, cartoonesque voice she screamed, "CARBS," causing the horde of gutchie glomming females to dart in all directions- while leaving me to the unfettered and attainable spoils.

I chose my cheap-ass panties in peace. Isn't that what the day after gorging yourself with great quantities of food is all about; peace and love and new panties?

Say what you want about my tactics but honestly, it was all Auntie Anne's doing. She's the real bitch here. 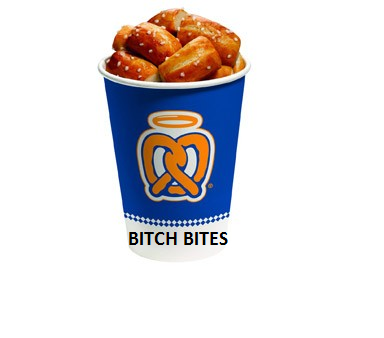