The 2017 Dillon Critter Christmas Letter
Narrated by: Khali the new kitten
Written by: Moby because he's the eldest and would beat my ass if I didn't let him
Stupid ideas and smart ass remarks by: inferior cats;
Poe, Fathead, Lily, Splave, Shocky, Mama, Petunia & Beepers
& Mutts (Mom made me include them)
Quincy, Igor & Yeti

Hi everybody! I'm Khali, the newest member of the Dillon clan. The dogs aren't happy that I have the honor of writing this years letter. But once they see what a good job I do, they'll forget all about being mad at me. If they don't...oh well, they can suck my balls. If I had balls. Oh that wasn't very nice of me was it? I'll burn in Hell later.

A little about myself first. Mom took me in the first day I was to start cooking at a Chinese restaurant. I'm a Cancer...I like to grab feet while hiding under the coffee table.  I enjoy helping mom and dad wash dishes aaaand....I'm addicted to discovering the effect of negative ions while they replicate invarious dark matter in relationship to universal quarks. It's a hobby.

For this years letter, we wanted to do something a little different. We wanted to tell you about our Christmas traditions or a certain Christmas memory we had before being sold into slavery. Moby will go first.


Moby: I'll never forget that one Christmas....we didn't have a lot of money to buy every cat and kitten in our household a gift, so we took the time to stuff different colored yarn inside the crevices of the old lady that took care of us. We did this AFTER she croaked so don't get all bent out of shape snowflake. After we said our sacred feline prayer of, "Yub yub, thanks for the grub," we munched the shit out of her, which, contrary to popular belief, people do NOT taste like chicken. We each ingested a bit of string and waited. After a few days we started pooping out the string and that's when the excitement began. We'd rush to figure out who pooped out the same color! Well...after we washed it off. And we'd exchange gifts with the kitten who had the same color string....errr...wait...or was that the year we had to fight to the death and then eat the kitten that pooped out the same colored string?  Dammit, there were some bad winters when we were growing up.

Poe: When I was a wee kitten, we knew and sang only one Christmas song, it was, I'm Dreaming of a White Christmas. It was a family favorite.

Khali: I love that song too!

Poe: Unfortunately, you aren't pure enough to sing that song with me. You're a filthy spotted half breed.


Khali: Jesus strawberry eating Christ, what the hell???  I didn't know you were a racist bastard!

Quincy: Ummm...what do you think his costume was for Halloween? He wore a sheet and carried a torch?

Khali: I thought he was a ghost and he didn't have a flashlight!

Yeti: It's okay if you're stupid. They call me names too. Kinda like when the other reindeer  bullied Rudolph. Wanna eat some chalk?

Khali: Ah... HELL NO!  Will someone else please tell us about your non-racist tradition!!!

Fathead: At the first big snow, my family would all go outside and frolic. It was magical. But...one year, I took my special Christmas present outside. It was a Red Rider BB gun....

Khali: Oh no! Did you shoot your eye out?  Is that how you fucked up your eye?

Fathead: What the hell are you talking about?  I didn't shoot my eye out. For your information, I lost my eye in a freak two-car diabeetus accident. No, I took my Red Rider BB gun out and took out a gang of bikers that tried to take over our territory. That sent out the message far and wide that you never mess with the Cats of Anarchy! We feasted on their carcasses for weeks. We took their old ladies as new breeders for the club too. Hell, you could be one of my great-great-great-great-great grand kittens. Wanna join the club? I gotta shank you first.

Khali: MOMMMM!! "Screams and runs under the couch." 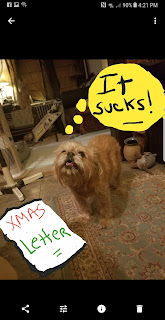 Quincy: Okay, back to the dogs running the show. Lily, you're up next. Tell em about your old traditions.

Lily: I lost my only kitten around this time a year ago....

Lily: I told him to hold my paw when he crossed the street but he thought he was a big boy and refused...

Lily: I didn't even know what happened...

Quincy: Stop doing this to yourself...


Lily: Exactly! What hit him was the fucking notion that he would become a Trump supporter!

Lily: He's found a crunchy Cheeto under the couch cushions and knitted suits out of scraps of fabric and belly button lint for it. He calls it Donald!

Quincy:  Do any of you damn cats have some nip for this bitch???? 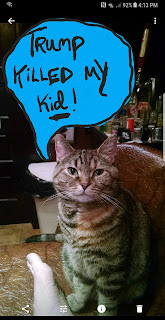 Quincy: This idea you had for the Christmas letter really sucks Khali! Hey, you...Oreo brothers. Do you have a happy holiday story?


Splave: Why yes we do. Thanks  for asking. Since we are Spanish....

Quincy: ...you are not Spanish.

Quincy: ...you're not Jewish either.

Quincy: Those were tin foil pie pans. You wore them when you were trying to contact aliens.


Splave: Well, then we got nothin.


Petunia: Our Mama here taught us how to make special cakes made with almond paste, milk and shrapnel. We called them...bombs.


Quincy: Err...you mean they ARE the bomb?


Beepers: Mama taught us how to sneak into homes by greasing our fur with chunky Vaseline and Cool Whip, setting us up for easy access down chimneys so we could stuff the stockings of the bad little infidels with cakes... and turds.


Beepers: She is singing the song of our people. And she's cheering the fact that we blew up the neighbor's garbage can.


Quincy: And what did that prove?


Petunia: It proves....stuff.  Oh by the way...I hope you're not attached to what's in your underwear drawer.


Quincy: Sorry about your shitty luck kitten. You're screwed like the rest of us. Yeti, please share something less....murdery


Yeti: Oh yeah! Well, last year Mom and Dad got us the Roomba. It was the bestest present ever. I would ride on it and play bumper cars into walls and furniture. That one time we fell down the steps wasn't that fun but... I loved it.


Igor: Yeah, you loved it until...tell everyone what happened.


Yeti: *sigh* I loved it, until one day while I was riding the Roomba; pretending it was my mighty steed and I was a fierce knight going into battle, I charged my Roomba into a boulder filled swamp.


Quincy: And what were they?


Quincy: And what happened to that creamy, warm poop.


Yeti:  It got squished under the wheels....


Yeti: It smeared poop all over the living room floor.


Quincy:  And why was Dad pissed?


Igor: And why did the Roomba stop working??


Igor: Yes, it hung itself. And what did the note say?


Yeti: *pulling out the note*  This isn't the first time. The little bastard is a shit loving freak. Please bury me next to the toaster. If you only knew what he jammed in there..."


Quincy: Sick fucker, ain't he? Igor, ya have a tradition ya wanna share or a memory you need to confess to the police?


Igor: Not with my parole officer present.

Quincy: Good, because I no longer care.

Khali: What about yours Quincy? Tell us your Christmas tradition.


Quincy: Well, there's the tradition where we haze the brand new family member.


Quincy: Yep, we hang the poor fuck from the chandelier and toss regurgitated hairballs and litter encrusted turds at them after a vigorous dousing of canned cheese whiz. (See Xmas Letter 2013)

Igor: It's all good. You don't have balls so we'll just aim at your head.

My book, Arithmophobia for Kindle

Yep, it's finally ready.  Well the Kindle edition is.  The physical.book.will be on the market very soon.  Check it out and give it a review.  Authors love reviews! 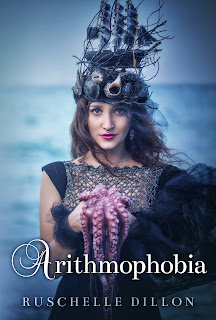 My Horror Tree Interview with THE Theresa Derwin

Feast your bleeding eyeballs on this enlightening yet humorous interview with Theresa Derwin.  Definitely an author to watch.

https://horrortree.com/horror-tree-presentstheresa-derwin/
at December 07, 2017 No comments: