Wal Mart Etiquette- Or...ForThose that Can't Read French -How NOT to be a Douche while Shopping Wally World

Wal-Mart is a shopping...experience. I get that.

Most red bloody-eyed M'uricans either love it or hate it. There is no grey area when it comes to the Wal of Mart.

Here is where the average...and not-so-average-Joe can do their one-stop shopping.

If you are looking for lighter fluid...it's here!
Socks?  Yep, they got em.
Fresh veggies? Sure as shit they do.
How about electronics? Well, I thought you'd never ask, yep-yep.
Bags of Lye to dissolve bodies? Well, duh!

See, Wal-Mart has everything you need and a bunch of shit you don't.

The problem with Wal-Mart is with all the stuff, excess and the obscene glut of people that visit the store every frigging hour of every frigging day...somehow, peeps forget how to be decent human beings.

So before you decide to step out to skip the light fandango of the local Wal Mart while thoughtlessly doing cartwheelies in one of the wheelchair carts and shop until you get seasick- let's go over some Etiquette or as spoken in the language of pure M'urican-ese--"shit that you shouldn't do while out shopping in fucking Wal-Mart."

This needs to be said with a Western Pennsylvania accent to fully understand the sentiment.

1. Always wear your GOOD pajamas & sweatpants when going to the Mart. Why? Come on.  Don't be stupid people. Stank-free, hole-less PJ's and sweats are exactly what the big stars wear when THEY go shopping. And if you're going to toss on your yoga pants, please don't complete the look with your beat up combat boots, a camouflage jacket, hat and matching scarf because...unfortunately, I can see you.  Western Pennsylvanians always wearing shit to let everyone know they 'like to hide in the woods.' You're not Bigfoot so you're not hiding from anyone. Especially in Wal Mart! So take a tip from Fashion Police, Say Yes to the Dress and Rue Paul's Drag Race; always look like you're trying. Even when you're not.

2. If you MUST have a three hour conversation with your long lost half-sister's babysitter's uncle, or that neighbor you would never get caught dead speaking with in your neighborhood, please, for all that is friggin' holy, pull your carts over to an area where people are not trying to reach over you to get, I don't know...GROCERIES-- since it is a damn grocery story. And if you are reminiscing back when you were in high school, since that was the last time you actually saw this person, do not---I repeat, DO NOT give anyone the stink-eye because they are trying to snag a box of toothpaste that you so happen to be loitering in front of.  YOU are the one deserving of the stink-eye, not the person tying to SHOP. But, if you MUST have a conversation with one of your six baby-daddy's mothers about, "How come he doesn't pay me my money for child support when I see he's driving a new car with his even newer ho..." go to the fast food restaurant that your Wal-Mart has up front...unless you want other people's opinions....because if you're airing our your 'bidness' in front of strangers don't get all pissy when they start schooling you. Especially, when you're stupid enough to have six baby daddies. And on that note...condoms are in aisle 12. Buy a box... or 4.

3. If your child is screaming louder than a Trump supporter defending the Presidents right to use Twitter as platform for future peace talks with shithole countries, please do the right thing and take your fussy child out of the store to calm him/her down. Maybe the kid is tired or hungry. Or maybe it's simply a little asshole. I don't know anything about your demon spawn. But I do know, that no one wants to hear your kid yell and throw a temper tantrum in the middle of a "therapeutic" shopping session. NOR, do they wish to hear you attempt to OUT SCREAM your kid or watch you act like someone who should have been sterilized at birth.  If you were smart enough to have kids, be smart enough to learn how to take care of them. Oh- and don't tell me you need to take them to the store because you don't have a sitter.  I do get that, but then teach them how to act or take them outside to calm them down. Don't be a rutting, breeding asshole, Asshole.

4. If you need to use the bathroom while you are shopping, please leave the rest area the way you found it. Meaning...because I'm certain there's one person reading this that will say, "I don't know what you're talking about." That person, would be lying of course but, I'll give em' the benefit of the doubt.  So here it is...Don't raise your ass because you refuse to sit on the toilet seat because it's GROSS and then spray the entire stall with your disgusting fecal matter!  That's what I mean! Do people do that in their HOME bathrooms?  I get a little tinkle on the seat. It happens to the best of us, but when the seat and the surrounding area looks like a someone was murdered in the stall, ya know...stay the hell home until you can get your bodily fluids under control. Are you fucking two years old? 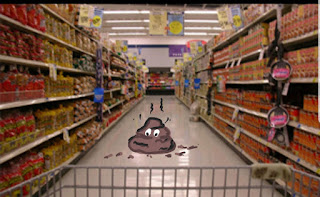 6. Another one for the bathroom and the parking lots....don't shoot up with drugs in either and die. That's just rude for everyone involved. People are waiting FOR BOTH. Give someone else a turn, will ya?  Some people think of no one but themselves.


7. Before shopping with throngs of people, let me give you a tip. Bathe. Yep, apparently there are those that believe shopping at Wal-Mart means forgoing soap, deodorant and toothpaste. I can understand if you have run out of such things and are shopping to restock. But this is NEVER the case. I've stood in line next to men and women reeking of BO and ass. And it's not like the scent just happened on their body when they walked in the door. Nope, that stench is from body funk aging and fermenting like cheese-- and not in the delicious fromage variety. I am not one that finds the smell of musky pubes, halitosis and sweaty sub shop HOT. Maybe our ancient ancestors eked out each others crack crud to find a mate and ensure the propagation of the human race but it's 2018...I'm going to douche your disgusting ass with some dishwashing liquid, a hose and a gallon of Axe body spray....that I will purchase at Wal-Mart. You get a pass if you are mentally challenged. Only pass I'm giving today. So deal with it, butt-stench boy.

8. Don't hover over a product and not let anyone else near it. It is not yours until you pay for it. So don't piss a circle around the stand up freezer with a selection of fish sticks and think you can call "dibs" on all of them while you decide the exact brand/flavor/ingredients/price you want. Move over to the side a little. Give others that KNOW what they want the chance to grab their fish stick and move along. Just because your an indecisive twat, (Yep, I used the 'T' word. See, I embrace certain words, because, guess what? That's all they are...WORDS. Now back to your regularly scheduled rant.) it doesn't mean everyone else is. I know I want the crunchy fish sticks, so move aside ya bitch ass fish stick monger!

9. If you are checking out with one of the Wal-Mart cashiers have all your crap ready. Once you're in the home stretch- get your cash, gift cards, check book, WIC check or check card OUT and ready. Don't be the asshat who stands there digging everything from a used cucumber to 12 sets of car keys to a pile of dirty diapers out of your purse or billfold after everything is packed up, ready and waiting for YOU to get your head out of your ass.  It's called, 'Be Considerate to Others'. I'm sorry your mommy didn't love you enough to teach you those things.


10. Riffing a little off of number 8....BE CONSIDERATE. I get this world is rough and not everyone is feeling their humanly best when they venture out in the world, but there is no damn reason you can't be pleasant to people. If someone is kind enough to open a door for you, smile and say THANK YOU. Don't just walk through the door like that person OWES it to you. Say EXCUSE ME, when you bump into someone. Why the hell is everyone looking for a damn fight?  Manners! But it seems to me that everyone expects everyone else to have manners...except for them. This is a particular pet peeve of mine. I'm sorry about the rant. See, I at least apologized.


11. Wrong is wrong. I don't care that your neighbor returned their live Christmas tree two days after Christmas because they didn't need it any longer and you think you should do it too. I don't care that all six pair of underpants you bought don't happen to soak up as much menstrual blood as you thought they would and think you deserve a refund. I don't care if the cashier accidently gave you the wrong pack of cigarettes and you felt the need to throw them at her and tell her she was a idiot. That behavior is wrong! WRONG! The customer is not always right, ESPECIALLY when they're WRONG. Ugh. Let's go back to number 10's message which was BE FUCKING NICE! Especially in Wally World. This is the big box store where the mascot is a happy smiley face. And no one is happy...not even the smiley face.

12.  I'm CERTAIN I'm missing some Wal-Mart Etiquette. But I'm tired of telling normal, usually well-adjusted people who SHOULD know better what to do while shopping. Please feel free to remember this information the next time you decide to go to Wal-Mart and decide to be a dipshit. I'm trying to make the world a better place....one goddamn Wal-Mart visit at a time.