2007 X-Mas Letter from the Dillon Dogs


Typed by:  The Cats

JAN:   This was a CRAZY month. The Cats decided to become Scientologists! Every Meow out of their stinkin’ mouths was, “Tom Cruise this…” and “Tom Cruise that...” It was disturbing. One cat puked up a hairball that looked uncannily like Tom F-ing Cruise and worse, began to worship the nasty thing. That really upset Quincy because, as you all know, he’s a re-born again, born again agnostic. Quincy started bellowing about worshiping regurgitated false gods and to the cat’s horror, he chowed down on the Cruise-Ball! Wow! He strutted around the house for DAYS telling the cats that they should pray to his asshole because the second coming of Cruise would be arriving soon. That snapped the cats back into reality. Thank god they’re practicing Jews again.

FEB:   Went to the vet to get our nails trimmed. Dog park my fuzzy ass! I pooped on the floor for that little scam. Mom baby-sat our little human cousin Kapryce for a few minutes one day. She got into a lot of stuff, but it was okay, it wasn’t mine. When she left, Mom said something about throwing herself down the stairs twice this month, whether she needed to or not. I had no idea what she was talking about but it was fun as hell racing her as she rolled down the stairs. It was a tie. Mom landed in poop. Guess who’s?

APR:    Got our photo taken with the Easter Bunny. Bastard will know next time not to run.   (not actual photo) 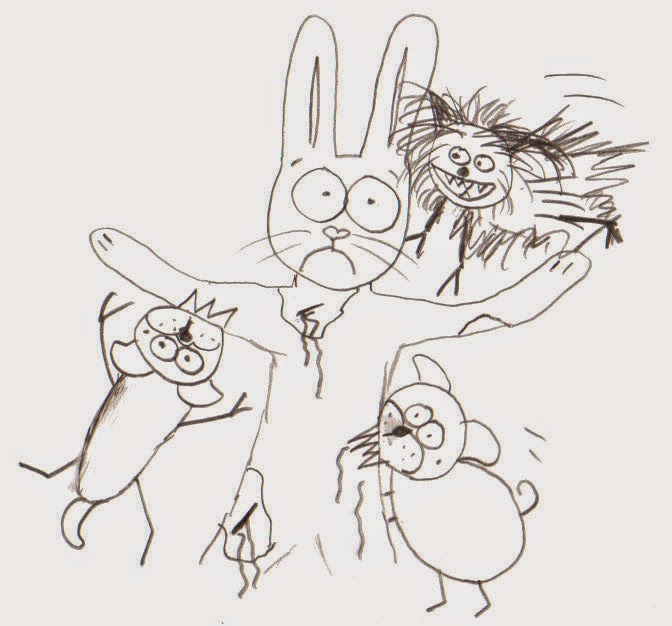 MAY:    I had to go to the vet for a diagnosis of my back legs. The vet says it’s nerve damage. Probably from that Agent Orange stuff those “Zipperheads” were spraying while I was in Nam. They can take my legs, those yellow-eyed pricks, but they can’t take my spirit. I read that on a box of HoHos. I smacked Tazzy with my new cane for calling me a gimp. That’s MR. GIMP to you fatty! I wonder who Steve Austin’s doctors were. A bionic tongue would be sweeeeet.


JUN:     Mom caught Dad molesting his Action Figures in the bathroom again. You should have seen the look painted on Captain America’s face. Can we say, “Homoooo”?   Mom enrolled the three of us in classes. Who would have guessed Tazzy would be such a graceful pole dancer.

JUL:     Okay, I know you all saw our mug shots in Petsmart, Petco and your local news stations, but let me put the rumors straight: we DID NOT have sexual relations with those ferrets. It’s physically impossible and not to mention, EWWWW! Never believe a dirty weasel, especially ones on crack who screwed you out of 40 bucks. Dad found Quincy poop in the computer room with a note that read, “snacks.” Busted.

AUG:    Tazzy was sick of the cats, and me, poking fun of his weight. He didn’t appreciate the brotherly jabs of being called, Pug Chop, Pugzilla, or my favorite, Fat Ass.  So, Tazzy decided to start an exercise regiment. Quincy and I decided we wanted to look more buff too, so we all chipped in and bought some sweet headbands, a Bowflex and a crate of illegal Mexican steroids. By the end of the month, we were so ripped, we had muscles in our shit! Quincy got huge and began to resemble a small yak. And Tazzy really built up his peck and sphincter muscle. He was so fit, when he pissed, the stream blew him across the yard. It was amazing. Mom and Dad eventually found out we were “juicing”, so they cut off our Pay Pal account. Quincy pooped all over the dining room table in protest and blamed it on “roid rage.” I don’t think Mom & Dad bought it.

SEP:     We took a trip to the majestic Redwood Forest. It was AWESOME. It’s every dogs dream to visit the beautiful ancient redwoods and piss on every goddamn one. It’s the dog Olympics. You must train! Tip #1: Water, water, water or you’ll only hit a few trees before your stream runs dry. Tip #2: Don’t shoot your wad on the first few trees. A squirt here and there will get you past some of the big dogs with monster bladders. Tip #3:  Don’t piss on Sasquatch. I don’t care how much he tells you he’s into gay porn and golden showers. You will regret it. He’s a one sick fuck monkey.

OCT:    Got really wasted with the cats. They get all the good shit.

NOV:     Watched a lot of TV. I believe that Rachel Ray needs to be rolled in flour, pissed on and eaten with a side of bacon-flavored polenta. Oh my god, I’m starting to sound like Sasquatch (see Sept). On a crappy note, Mom won’t let us watch the dog shows any more. She flipped out when she saw all the used tissues and empty bottles of Jergens Lotion in between the couch cushions. Come on, some of those bitches are HOT!   We tried to pin it on Dad, but since Mom didn’t find any naked action figures strewn about, she kinda knew.

DEC:     Here we are Christmas time again. To all our friends and family: we love you and hope you have a wonderful holiday and a fruitful 2008. To the rest of you, go fuck yourselves. How did you get this letter any way? You know we ain’t friends! I wouldn’t write you a letter if you were smeared with bunny poop and pepperoni. And you know how much I LOVE bunny poop and pepperoni…
at December 05, 2014 No comments:

2010 “Top 10 Things that Suck-Ass about the Holiday’s” as Narrated by
Ozzy, Edited by Tazzy, Quincy and Typed by the Katz who Shall Remain Nameless Because They’re Nasty Little Heathen Bastards Who Don’t Deserve to be Acknowledged


First, we had to wait in line for HOURS and when we got to the front of the line, nothing exciting happened.  We didn’t get spinned in a circle to circus music or nothing.  tried to stuff a pitiful origami dollar into this chick’s big-ass cleavage, but she was crying.  Apparently, she expected more than a dollar.   By the time most people got to the front of the line they were pretty friggin’ tired since there was no juice or cookies to tide them over, so they plopped down in front of this tricked out couch waiting to take a nap.  But someone hogged the couch the whole time so people got up and left!  How rude is that?  The highlight of the party was when Tazzy peed on all the ugly flowers on the floor.  We split because the party was dead and cause Tazzy peed on the ugly flowers.  Who started this Christmas tradition?  It’s terrible.  I don’t recommend it.  I heard somewhere it’s a thing.


They tell us to, “have nice day” and “thanks for shopping at Wal-mart.”  Truth be told, they no gives two-shits.  They rather be working at Long John Silver’s, getting paid in fish.  I can’t say I blame them.

Hey! Who wrote this?   Knock it off, you goddamn CATS!!!  Stop hijacking my holiday letter, ya tuna lickers!


What’s the point of putting a damn shrubbery in the house that you can’t piss on?   Then, Mom and Dad decorate under the tree with a white sheet to resemble snow.  Well, I decided to make look more realistic so I pooped in it.  Yup, I call it, “Christmas in .”  A friggin’ masterpiece.


When a simple argument gets physical, it can ruin a perfectly good meal.  Last Christmas, Tazzy got pissed because pilfered his turd stash.   I got shitty because didn’t let me in on his turd stash.  We all glared at each other from across the dinner table until grinned and popped an ill-gotten turd in his smug bastard face.  All hell broke loose!   We were wrestling in the mashed potatoes, slapping each other’s faces with meat loaf and rolling around in the sub-par salad bar.  Now, we are banned from Eat and Park.  *Sigh* Just remember, started it!


What do I care that a “ho” made cookies?  She’s got a hobby, so what?   But sometimes I find an OREO on the plate.  Ho’s don’t make goddamn Oreos.  It’s an Oreo!  Damn ho’s lying.  Where’s her pimp?  She needs bitch slapped for that shit.


They are a grim reminder of intact testicles from Christmas pasts.  Have you ever been haunted by your nuts?  It’s scary as all hell.

4.  Pissing Outside in the Snow


Two words, it SUCKS.   We like to try and piss off the porch and see which one of us can hit the neighbor’s snowman in the face.  It becomes a game of war.   “Take THAT ya piss-faced snow-fucker!”   Good times.

3.  The Toys from Rudolph the Red Nose Reindeer


Tazzy wants to fly to the island of misfit toys and beat the shit out of each and every one of those stupid-ass toys.  “Nobody wants a cowboy that rides an ostrich,” Really?  Then get a horse, Dumbass!  “Nobody wants a Charlie in a Box?”  Whiny little piece of shit toy.  Well, go to Social Security and change your name.  How hard is that?    I never figured out the little red headed doll’s malfunction.  thinks she menstruates.  The cats claim she’s a lesbian.  I think ’s right.  Gives a new meaning to the word “rag-doll”, doesn’t it?


I never get what I want….ever.  Quincy asks for the usual: treats and toys and a freshly-killed reindeer carcass; stuff we get EVERY year.   Tazzy asks for stupid shit like peace on earth and an Ethiopian to gnaw on; like they’re in season this time of year.  In 1996, I asked for the cats to be set free from being held hostage by their white oppressors.   I got neutered instead.   In 2007, I asked for all the cats to be sent for scientific experiments.  We got TWO more cats!  DAMN IT!   In 2008, I asked for tuna baited bear traps.  I got a yarmulke and a sweater that says “Bad to the Boner.”  What the fuck is that?  I’m not Jewish!  Tazzy claims his penis was Jewish at one time but that was because he didn’t want to have sex with this miniature pot bellied pig that he met online.   Santa has really pissed me off.  This year I asked for a gun and 10 bullets.  Oh, please, please, please…….

My Horror Tree interview with THE Nicholas Bowling

Check out his lastest work, The Following.  https://horrortree.com/the-horror-tree-presents-an-interview-with-nicholas-bowling/ 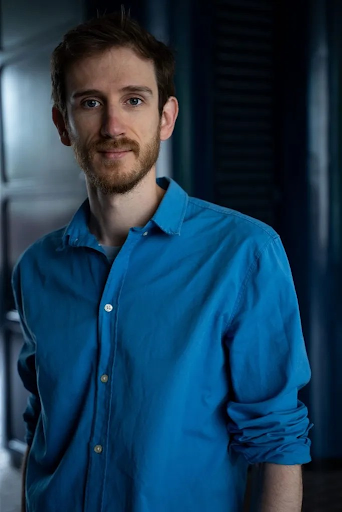