This story is for the uber SUPER Geeks. You know who you are...... 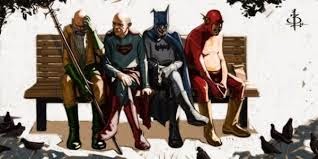 Check out Randommization.com   for more cool pix!
Men of Silver﻿


“Jeez Louise, think you could turn the heat up in here?  It’s freezing," Bruce Wayne grumbled, wrapping his old cape around his shoulders.


Clark Kent yawned. He’d heard this gripe from his former team mate before, “How many times do I have to tell you, you old bat, there isn’t a thermostat in the Fortress.  You always underdress. Put on my slippers. They’ll warm you up.”


Bruce starred at his host, the prior Man of Steel and leaned forward in his own recliner.


The awkward silence and eventual one word answered that followed said it all, “Who?”


Agitated, Clark stripped off his identity suppressing bi-focals and rubbed his less than super-eyes.


Confused, Bruce pointed a finger at himself.


“No Clark. I’m Batman. Remember?” he sucked his dentures, “It’s okay. I forget who I am sometimes too. Luckily, someone stitched my name in my underwear,” he said, still pointing to his chest.


“Yes, Bruce. I know you all too well. We’ve fought many battles together. Remember the epic war with Darkseid? You were magnificent in that encounter. By the way, I ran into Darkseid at the Justice League Retirement Community. He’s still a prick but with the glaucoma and osteoarthritis, his once forbidding Omega Beams are only good for warming his cocoa.  Plus, it’s hard to get around in a nano-second when you’re riding a hover-round.”


Bruce laughed. missed listening to his old comrade’s laugh. He enjoyed reminiscing about the good old days where the good guys always vanquished the bad guys.


“Oh and you know who else is still hot?” he solicited with a bony elbow to Clark’s weakening arm- apparently not hearing any of the conversation.


“. I would have had a shot with her if it wasn’t for Superman,” he leaned in and whispered, “I did touch her boob once.”


balled up his fist, but resisted to follow through with a strike. Instead, he snatched up Bruce by the arm in a less-than-powerful grip.


Bruce slowly rose from his chair.


“Wow, time sure flies. Tell Alfred to bring the Batmobile around.”


“Alfred’s dead, Bruce. He’s been dead for over 20 years,” Clark snipped, no longer in the mood to circle the planet known as memory lane.


“I think he’s stealing my silverware,” Bruce hissed, shaking a gloved finger in ’s face, “I know he’s been hiding my things. Yesterday, I found my codpiece in the breadbox. I should fire him.”


Ushering Bruce out the fortress door, Clark rolled his eyes which accidently set fire to couch. After a wicked coughing spell brought on by emphysema, the Man of Steel finally managed to blow out the flames with his icy breath.


Knowing his old friend would need assistance traveling home he enlisted a fellow superhero to be his traveling companion. Clark pulled Bruce close and practically screamed in his ear.


“Bruce, Alan is going to take you home. You remember Alan Scott? A.K.A Green Lantern?”


Alan offered an outstretched hand, “Good to see you Bruce. It’s been too long.”


“Oh Alan, Alan Scott. Rumor has it you’re now one of those queers, right?”


hung his head. But Bruce persisted.


“I had to have this discussion with Robin so I’m going to have it with you too. I just need to get one thing straight…ME. Got it?”


Alan bit his lip. The likes of the Joker and Penguin had been his arch nemesis in the past but now the villains resided within him disguised as years of concussions and the ravages of dementia. He was then and now the Dark Knight. He forced an awkward smile.


“Good, now take me home. I’m freezing my bat balls off. Clark, why don’t you turn on the heat? Your Fortress is as cold as the White Witches tit,” he snickered.


Alan shot Superman a befuddled look. waved and shuffled back inside. Patting Green Lantern’s shoulder, Bruce grinned and shouted, “Up, up and away!”


And with a single invocation to the Earth and a lick of green flame both Batman and Green Lantern were gone.


dropped in his recliner and closed his eyes.