Dillon Xmas Letter 2006
Written by: Ozzypug, Tazzy and Quincy
Narrated by: Ozzypug
Typed by: The Cats

Mom and Dad were too lazy to write a Christmas letter to tell you what has
been happening all year, so all the "kids" decided to get together and
tell you ourselves.

January:  We slept a lot.  Ate some treats we got from "Santa" and got a
new water bowl.  Quincy got in trouble for pooping on the dining room
floor.  It didn't stop him though.

February:  Took turns chasing the cats.  Went for a ride...somewhere.
Tazzy got lucky and ate some dried cat poop, "a delicate flavor and
fragrant bouquet from the shrimp feast".  Got our new dog licenses and
Quincy got in trouble for pooping on the dining room floor.  Ouch,
Quincy don't bite me...Mommmm....

April:  Dad had a birthday, so we all made him a cake that was shaped
like Wonder Woman out of sweet, creamy, poop.  It was magnificent.
Tazzys butt was cramped for 2 days!  Dad was pissed.  Mom says he's
ungrateful.  Tazzy and I tend to believe her.  Quincy doesn't, he's Dad's
favorite. Fuzzy little bastard.

May:  Found a new spot outside to pee.  It's Dad's front tire!  Went to
the vet, yuck!  Tazzy completed his first computer programming class and
got an A.  Kudos man!  One of the cats finally learned how to lick his
ass with out gagging, quite an accomplishment.  And I took up the
trumpet, but gave it up because my teacher told me he couldn't teach me
anything because, get this, I have no lips.  Damn racist.  Quincy
decided to spice things up and poop on the living room floor.  Gotta
give him props for creativity.

August:  Mom & Dad were drunk a lot.  And I drank from the toilet on a
dare.  Note to self: never listen to cat whose just been "nipped".   I
may snack on the occasional turd but I draw the line at slurping piss.
I have my standards.  We got a new dog bed.

October:  Ate too much candy from trick or treating.  We had great costumes.  We dressed up like cats!  When we didn’t get stuff we liked, we just “tricked” them with homemade flaming poop bags!  It was too funny.

November:  We’ve decided that you probably really don’t care what happened to us in November so we aren’t going to write anything…except for the last sentence and this one.

December:  I’m tired of writing stuff and the cats keep making fun of my spelling so bark, bark, lick, lick and all that other Happy Holiday crap! 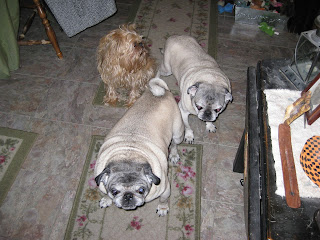